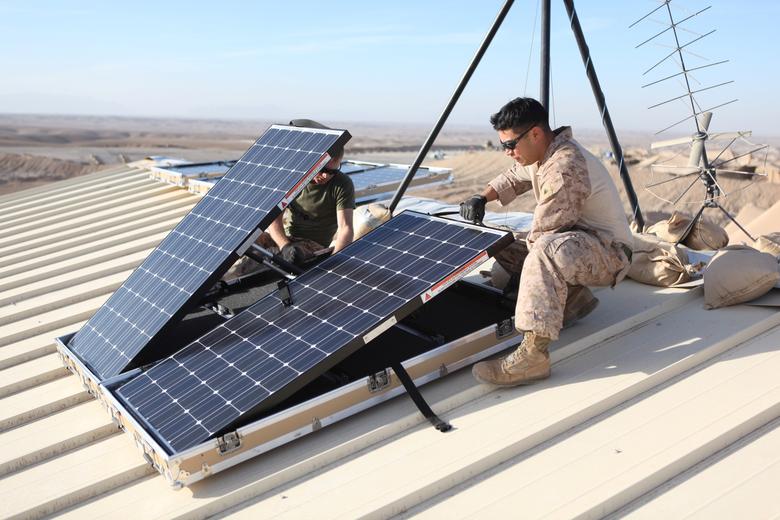 President Donald Trump and his top advisors have often scoffed at government support of green energy. His chief strategist called it “madness.”

But the largest U.S. government agency – the Department of Defense – plans to forge ahead under the new administration with a decade-long effort to convert its fuel-hungry operations to renewable power, senior military officials told Reuters.

The reasons have nothing to do with the white-hot debate over climate change. In combat zones, green energy saves lives by, for instance, reducing the need for easily attacked convoys to deliver diesel fuel to generators at U.S. bases. Mobile solar-power units allow soldiers to prowl silently through enemy territory.

At sea, gas-electric hybrid battleships save fuel and allow for fewer stops – making them less vulnerable to attacks like the bombing of the USS Cole in 2000, when al-Qaeda militants killed 17 U.S. soldiers during a refueling stop in Yemen.

The military’s zeal for renewable power has already had broad impacts on energy contractors, generating hundreds of millions in contracts for solar companies and helping to reduce fuel consumption by the world’s largest single petroleum buyer.

The armed forces nearly doubled renewable power generation between 2011 and 2015, to 10,534 billion British thermal units, or enough to power about 286,000 average U.S. homes, according to a Department of Defense report.

The number of military renewable energy projects nearly tripled to 1,390 between 2011 and 2015, department data showed, with a number of utilities and solar companies benefiting. Many of those projects are at U.S. bases, where renewable energy allows the military to maintain its own independent source of power in case of a natural disaster or an attack – or cyber attack – that disables the public grid.

The White House did not respond to Reuters requests for comment on the military’s use of green energy. Although Trump has blasted solar subsidies, vowed to boost fossil fuel development and questioned the science behind climate change, military leaders remain confident that the president won’t halt their march toward renewable power.

“We expect that it’s going to continue during the Trump administration,” said Lt. Col. Wayne Kinsel, head of the infrastructure unit of the Air Force Asset Management Division for Logistics, Engineering and Force Protection. “It’s really not political.”

Other senior officials in the Navy, Air Force and Army also told Reuters that they expected their renewable energy programs to continue.

Lt. Col. J.B. Brindle, a Defense Department spokesman, said the agency “spends very little appropriated funding” on renewable energy projects, but declined to give any figures or to answer additional questions about such efforts.

Trump’s Secretary of Defense, Jim Mattis, has long supported efforts to reduce troop dependence on petroleum. He saw first-hand the vulnerability of diesel convoys to attacks by militants while serving as Commander of the Marine Corps Combat Development Command in Afghanistan and Iraq in the early 2000s. As far back as 2003, he urged Navy researchers to find innovative ways to unleash the military from the “tether of fuel.”

LAUNCHED BY A REPUBLICAN

The military’s push into alternative energy started under Republican President George W. Bush in 2007, when he signed a law requiring the Pentagon to get 25 percent of the electricity for its buildings from renewable energy by 2025.

The effort accelerated under President Barack Obama, who required the Army, Air Force and Navy to each deploy 1 gigawatt of renewable power and directed the Army to open a lab developing energy technologies for combat vehicles.

In an apparent nod to Obama’s efforts to curb global warming, the Pentagon also reported to Congress in 2015 that the droughts and floods caused by climate change pose a security threat – contributing to foreign political and economic instability that could require substantial troop deployments.

Former Defense Secretary Ash Carter said in his parting memo in January that the Navy has already met its goal, producing 1 gigawatt of electricity – while the other forces are on track to meet their targets.

The programs have their opponents. The conservative Heritage Foundation, for example, has railed against the military’s support of renewable power and biofuels.

Solar companies such as SunPower Corp and utilities including Sempra Energy and Southern have won utility-scale renewable energy contracts worth hundreds of millions of dollars in recent years, according to the companies and Department of Defense documents reviewed by Reuters.

Southern, for example, has 11 solar projects totaling 310 megawatts on bases in states including Georgia and Alabama. In December, Sempra completed the 150-megawatt Mesquite Solar 3 in Arizona to provide about a third of the power needed at 14 Navy and Marine bases in California for 25 years.

SunPower has already landed a major deal under the Trump administration – a $96 million contract finalized on Feb. 3 to provide power to Vandenberg Air Force base in California until 2043, according to a Pentagon database.

Sempra and Southern said they were committed to serving their customers but declined to comment on whether they were discussing new contracts with the military. SunPower did not comment.

Tesla, which produces electric cars and batteries, is another company that analysts say could benefit from military contracts. A Tesla spokesman said the company is “supportive” of the military’s interest in clean energy but declined comment on whether it was pursuing Defense Department contracts.

The U.S. military’s use of oil, meanwhile, fell by more than 20 percent between 2007 and 2015. The bulk of the decline likely stems from declining combat operations rather than rising efficiency and use of renewable energy. But traditional military fuel suppliers – such as Exxon Mobil, BP, and Shell – nonetheless have a lot at stake if the military accelerates its move away from fossil fuels. (For a graphic on Pentagon’s oil purchases click tmsnrt.rs/2laqCBJ)

BP is constantly reviewing its marketing strategies to ensure growth, a spokesman said.

“As fuel slates change, we will adapt, and continue to provide our customers with the products they demand,” he said in response to questions about the potential impact of the military’s increased use of renewable fuels.

Hauling fuel to the battlefield has been a hazard for militaries since at least World War I and continues to take a grim toll. One in nearly 40 fuel convoys in Iraq in 2007 resulted in a death or serious injury, according to a study commissioned by the Defense Department. In Afghanistan the same year, one in 24 fuel convoys suffered casualties.

Marines in Afghanistan began carrying solar panels in 2009 to forward bases in battles with Taliban fighters. They used them to power batteries for communications, GPS and night-vision goggles. The panels not only reduced the need for convoys, they allowed marines to shut off generators, hushing operations and making them harder for enemies to detect.

Arotech subsidiary UEC has sold $25 million worth of the solar arrays and expects a bigger business in systems working with batteries and solar to slash dependence on generators, said business manager Nancy Straight.

Col. Brian Magnuson, the head of the Marines’ expeditionary energy office, established in 2009, said his office aims to replace diesel-powered generators on the battlefield with solar power, and to reduce energy use with efficiency measures such as insulated tents and the deployment of advanced batteries.

“These technologies are a way to become more effective in combat,” Magnuson said. “This is about war-fighting capability.” (For a graphic on a boom in military green energy projects, click tmsnrt.rs/2mbWXrM)

This article and images was originally posted on Reuters